Make plates according to the customer’s artwork.

Use the plate of the previous process to print the film paper. Film paper printing is to use a gravure printing machine to print special ink on the surface of a polymer film. There are very few companies worldwide that have this technology, including KingStar, only less than 20.

After the film paper manufacturer prints the film, its width is 50cm, 80cm, 90cm and 100cm, but the commonly used one is 50cm unless there is any special need. The water transfer printing factory will cut each film paper to 60cm*50cm based on the size of the stainless steel water bottle according to customer’s requirements. If the width of the film is 80 or 90cm, then 60*80 and 70*80 paper is also available.

After the film paper is cut into pieces, two workers hold the two ends of it respectively and place the water-dissolved side down on the surface of the water. Make sure the water in the sink is clean and basically in a neutral state with temperature between 25℃～50℃. The storage time is generally about 60 seconds, and then sprayed with activators. After the film absorbs water, it forms a parallel storage state with the water, and floats freely on the water surface. Due to the surface tension of the water, the ink layer will be evenly flat spread on the water and water baffle is usually used to fix the position of the membrane layer (see Figure 1).

First of all, let’s briefly introduce the activator. It is made of several chemicals according to different proportions, such as butanone, xylene, etc. The formula of the activator in each factory will be somewhat different. At the same time, the activator is a kind of organic mixed solvent mainly composed of aromatic hydrocarbons which can quickly dissolve and destroy polyvinyl alcohol, but will not damage the patterns, so that the patterns are in a free state and can achieve the effect of activation which plays an important role in the water transfer printing industry.

The step of spraying primer is optional. Some bottles need to be sprayed, some do not, and some are sprayed with a color base. For example, if you want to have a good wood grain effect, you must spray primer to highlight the wood grain effect. KingStar’s fully automatic fuel injection equipment can not only automate the operation of painting but also avoid the potential health damage to operators.

When the film paper is sprayed with the activator, put the bracket that has placed the stainless steel water bottle along the outline of the water bottle and gradually approach the water transfer film (at a 45-degree angle) immediately, and the patten will be slowly transferred to the water bottle under the action of water pressure. Adhesion occurs due to the inherent adhesion of the ink layer to the substrate or special coating. During the transfer process, the lamination speed of the substrate and the water-coated film should be kept uniform to avoid the wrinkles of the film which is unaesthetic. In principle, it is necessary to ensure that the texture is properly stretched, and try to avoid overlapping, especially at the junction. Too much overlapping will give people a messy feeling. The more complicated the stainless steel water bottle, the higher the requirements for operation.

Remove the water on the surface of the stainless steel water bottle to facilitate the complete drying of the transfer ink layer to increase the adhesion. A hair dryer can be used to dry a single sample while drying box or backing line are usually used for drying batches. The drying temperature of plastic stainless steel water bottles should not be about 50 to 60 °C , and can’t be too high otherwise it is easy to deform the substrate. While the drying temperature of metals, glass, ceramics and other materials can be appropriately increased.

After drying, in order to enhance the resistance of the pattern layer to the environment, the surface should be sprayed with protective paint. The paint can use solvent-based varnish or UV varnish, which is cured and dried by UV light. In contrast, UV curing is more environmentally friendly. Solvent-based varnish needs to be mixed with a matching hardener, and the thickness of the coating can be controlled by adding an appropriate amount of diluent to improve the viscosity of the varnish.

Be careful not to dry in the oven. It can be dried naturally depending on different printing materials.

Defective products such as those with dust spots or ink not transferred to the right position, etc. in the whole process should be checked out in time. The higher the quality requirements of wholesale stainless steel water bottles and tumblers in bulk, the stricter the delivery inspection. 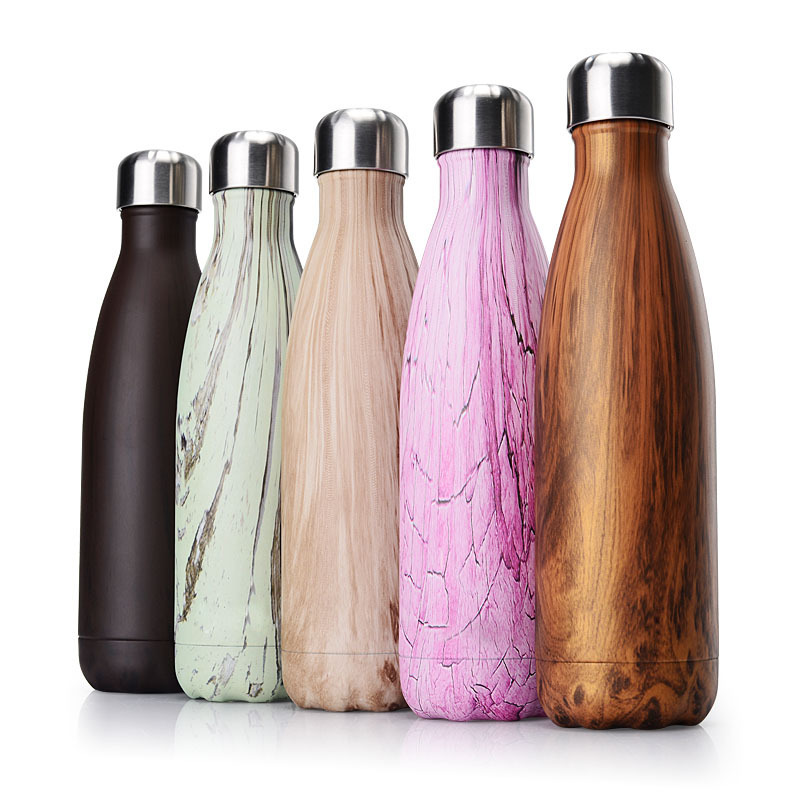 KingStar provides pattern customization services. If you need to customize water transfer patterns such as wood grain, jade pattern, then you need to provide artwork in ai, esp or pdf format.

If Artwork is in pdf or jpg format, make sure its print not less than 50*60cm.

KingStar is one of the leading manufacturers of custom stainless steel drinking bottles, providing one-stop service – from design, drawing, mold making, mass production, to global shipping. Our company has rich experience and process capabilities for custom patterns. If you have any questions or customization needs, please feel free to contact us.